Supporting Education for children IN NEPAL 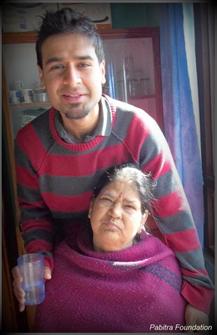 STORY BEHIND THE FOUNDATION

Everyone Has their story. I will tell you a story today.

I am Sanjeev Niroula and profession wise, I am an Electrical Engineer, currently living in Long Island, New York. I was born and raised in Kathmandu, Nepal and came to the United States when I was 20 and have been living here ever since. I attended college here, graduated and now I work.

This Charity organization has been named after my mother, Pabitra Niroula, who recently passed away. She was and will be my inspiration for life. I have realized how lucky I have been to know my mom and the struggle she had to go through to get me and family members to where we are today. Through this organization I hope I will be able to get a lot of support for kids who need help to pursue their education.

I would like to Share her story and hope that this would help the kids who are in need.

My mom grew up in a rural village in Udayapur, Eastern part of Nepal. She moved to the capital during her mid-teens and joined the police force where she met my dad and settled in the capital. Pursuing education, at that time, especially for a woman was not a commonality. More common for women was to have kids and look after them and find sources of income so as to sustain the family. My dad had gotten a head start in education back in his village where he grew up as it was more common for men to be educated at the time.

My parents raised four kids, I being the youngest or the spoiled one, if you may. Although she did not get a chance to get herself educated, along with my dad, she gave it all as far as educating all of her four kids. However, all her life she did have a desire to read and write. She managed to identify the Nepali alphabets, Nepali numerical digits and here and there,she would use cute "Nepanglish" words. I remember, she would ask us to take her picture and she would pretend to write on a piece of paper while acting as if she was talking on the phone to someone. It was difficult for her to pursue education herself when she was young since she had to choose between education or family. She chose latter.

She would mention from time to time that "No one should be deprived of education".I would tell her that I wanted to open a foundation after her and that would bring about the best smile that would make my day.So here I am today, and a start of a foundation and I hope to work with Kids who have difficulty in pursuing education and I hope to get a lot of support from the people that I know and will know in the future.On the long run my plans include a visit to the origin of my mother, rural village of Udayapur and opening a school.